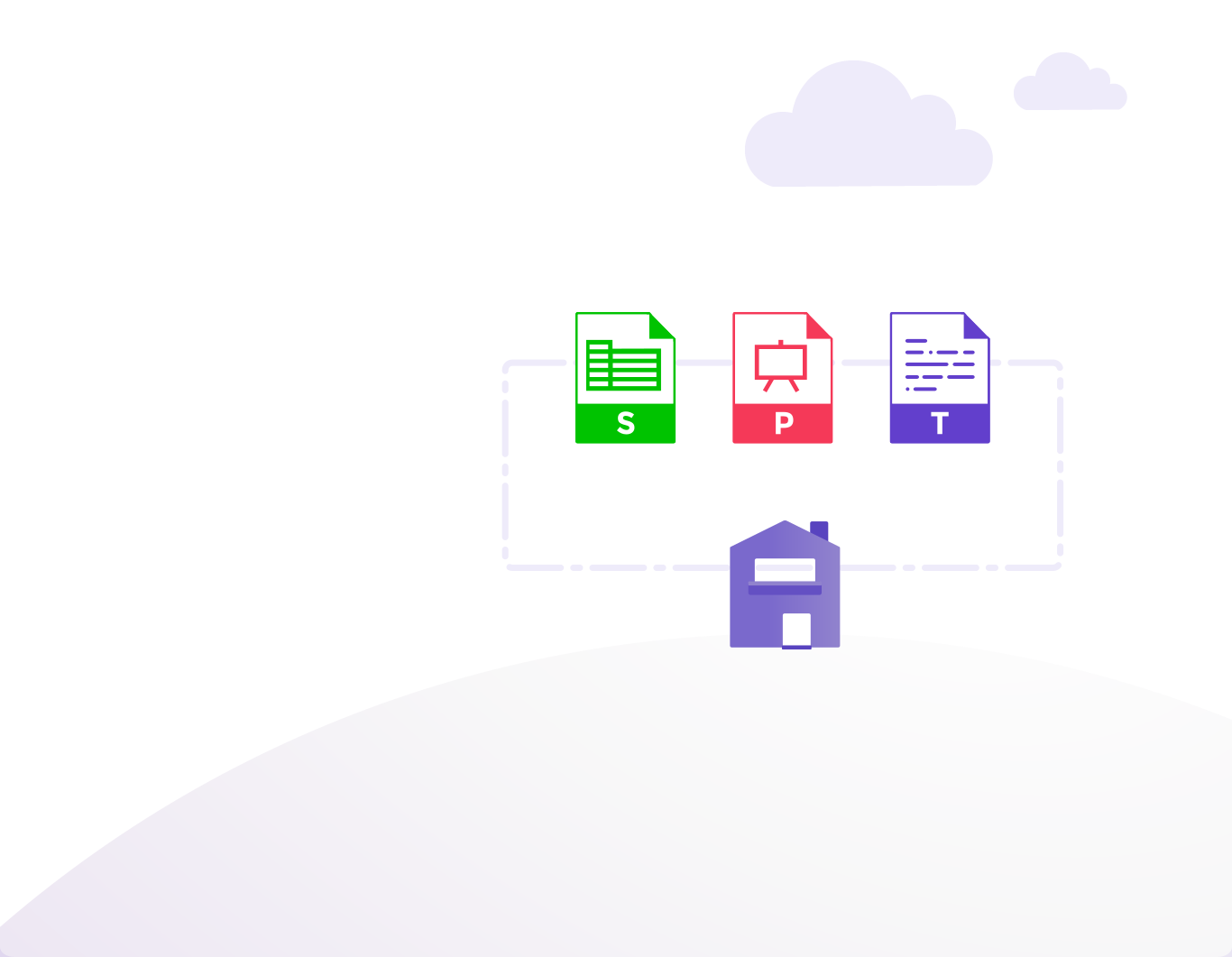 Get your own online Office Suite up and running at home with CODE!

The development edition is aimed at home users and contains many of the latest and greatest developments. We want as many people as possible to try it out and get back control of their own online documents. We’d also love to get people involved in our efforts to make Online even better. So download Collabora Online Development Edition, enjoy using it at home.
And … why not participate in the project too!

Getting set up the Collabora Online Development Edition

Get it at the Univention App Center

The easiest way to install CODE for a quick tryout is to download it as a virtual appliance from the Univention App Center.This appliance contains the Collabora Online Development Edition, and the additional software you need to get you up and running in minutes. You can choose between two types of integration, CODE + Nextcloud or CODE + ownCloud. Each appliance is available in four formats: KVM, VirtualBox, VMware Workstation and VMware ESXi.

The collabora/code Docker image can be installed to any x86-64 host (e.g. on Linux and Windows 10), and it is fully configurable. For more information about setup and configuration for deployment, please read the CODE Docker page. If you want to try it out quickly, you can set up CODE docker image with file sharing integration in less than 5 minutes in a very basic way, following these instructions: quick tryout with ownCloud or quick tryout with Nextcloud.

Setting up a reverse proxy and SSL

It is highly recommended to set up a reverse proxy in front of CODE, either you run CODE from Docker, or you use native packages. It is easy, and this way CODE can be reached on standard HTTP or HTTPS ports. We provide sample configuration files for Apache2 and Nginx. If you want SSL, we recommend certificates from Let’s Encrypt.

Now you can give https://collabora.example.com as the WOPI URL in your preferred File Sync and Share solution. See below for specific examples.

That’s it – once you’ve integrated CODE with your preferred File Sync and Share (FSS), or started up your VM you should be setup to share and collaborate on your own documents, with friends, from the comfort of your own home.

So now you’re all happy and secure, why not participate in the project?

Participate in the project

Checking out the source code to build it yourself is easy; http://cgit.freedesktop.org/libreoffice/online has the latest commits, and build instructions. After compiling ‘online’ just do a $make run and follow the link to tweak things live. The API is visible here: https://www.collaboraoffice.com/collabora-online-editor-api-reference/ and LibreOffice Online API.To send patches, and collaborate with other developers working on the code please do join in at #libreoffice-dev on irc.freenode.org, or join the Mailing List. If you want to help update the documentation please do help out in the Wiki, to file bugs please head to Bugzilla and as you file a bug – please do take the time to confirm at least one other un-confirmed bug if there are any. Help fixing bugs, and patches that arrive via gerrit are most easy for us to merge.

LibreOffice Online is great for home use as well as enjoying the latest translations and developments. CODE is a somewhat more conservative version – but still a development edition – of Online, and is built around the Collabora Office core.

Partners and clients get access to the partner portal. How does it look like and what do you get? 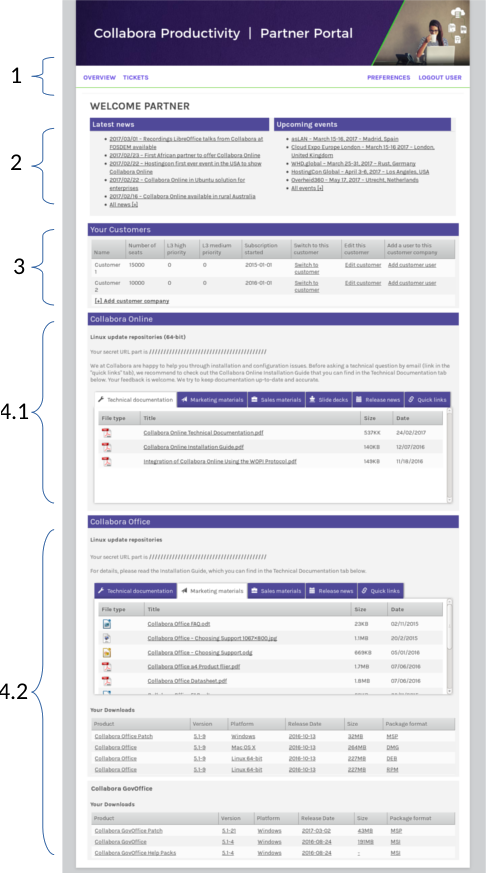 Become a partner and add Collabora Online to your product portfolio

Where can I find out more about the technical architecture?

Clearly the code provides the canonical version of everything. However – here is some basic overview. The code splits into four pieces:

This is the API that allows the re-use of the bulk of the existing LibreOffice code. It exposes a simple abstract API to allow loading, saving, and rendering documents to image tiles, and also exposes an event based editing core. This piece lives in the main core.git module of LibreOffice.

This manages incoming session traffic, services cached document tiles, and spawns LibreOfficeKit client instances, setting up heavily locked down chroot jails for them. The code for this piece lives in loolwsd/ inside online.git.

This code is built on leaflet and provides the front-end, toolbars, and rendering of the document contents as it runs in the web client, it lives in the loleaflet directory in online.git.

Clearly on its own CODE is not terribly useful – so make sure you integrate it with your preferred FSS cf. above. The FSS implements a protocol such as WOPI to serve your document data, and integrate with its existing authentication mechanism.

So is this a new Office Suite written in Javascript?

In a word – no. This is LibreOffice brought to your browser in a new and interesting way. There are many good reasons not to duplicate, re-write and re-debug eight million lines of C++ into many millions of lines of JavaScript. Indeed – we have the opposite approach, of trying to minimise the amount of custom Javascript, and to share as much code as humanly possible with the PC and Mobile versions. There are also serious questions about how quickly it would be possible to JIT and execute such a large volume of Javascript – even if it were created, the problems of maintaining two diverging code-bases and synchronizing them is a well known nightmare, and finally – ongoing development is already hard in type-safe C++ with many extra compiler, safety checks; moving to type unsafe Javascript would make things un-maintainable. Instead by re-using the existing LibreOffice code we get huge benefits in terms of rendering and layout fidelity with existing ODF and proprietary file formats. So what you see on your Tablet, Browser and PC (Linux, Windows, Mac) should be identical – absent unusual and non-embedded fonts.

Why didn’t you fix my bug yet for free?

Please feel free to join our efforts in making this the best Online Office Suite. We’re working hard to make CODE better, but more help is always welcome. Learn more in “Participate in the project”.

Is this all Free Software / Open Source?

Yes, of course. That was easy wasn’t it: Open First.

Where is the roadmap?

The development edition, aimed at home users, contains the latest and greatest developments and things are moving fast, but there is no published roadmap. If you want features delivered to your schedule then you’re looking for the commercial edition of Collabora Online.

Can I re-use your screenshots & content for my blog / article?

Yes naturally, please use this page’s content under some CC0 license / Public Domain as long as you respect our trademark, we love to get the message out.

Who did the work?

CODE is built on top of a huge volume of work from both LibreOffice (credits), however the Online functionality was created primarily by Collabora (as announced in 2015) – read more about the story of that here. And thanks to Lukas Reschke for help with the docker image.

The first integration for ownCloud (and later for Nextcloud) was built on top of Documents plugin (based on work of Frank Karlitschek and Victor Dubiniuk) that was renamed to RichDocuments. Currently we have many more integrations written by either by Collabora or by Collabora Partners.

What are the latest updates?

The Packages, VM and Docker Image are regularly updated. Keep an eye out on our blog or twitter feed for news of changes.

If you have any suggestions for changes or have ideas for improvements, please contact us at hello@collaboraoffice.com.